The US economy has been recovering from the global economic crisis for the past five years. The economic recession threatened a collapse of the banking sector with poor savings and investments, as well as accumulated debts. The country’s unemployment levels also increased due to a stretch in economic resources that lowered the country’s Gross Domestic Product. Five years into recovery, high school and college graduates are increasing in number after each graduating season. Consequently, the number of idle graduates is also increasing. Economic analysts have coined the term “disconnected youth” to refer to the people under the age of 25 years old that are neither studying nor employed. The government released shocking statistics last year showing that one in every ten recent college graduates and one in every five graduates from high school fall into the bracket of disconnected youth. There are also different think tanks in the country that have analyzed government census results to come up with shocking conclusions about the recent college graduates in the job market. The market has shown uncertainties, as far as both in job opportunities and wage levels for college graduates are concerned.

The Economic Policy Institute reports that the market is still a mess after the global economic recession. An annual average between March 2013 and April 2014 shows that approximately 9 percent of the recent college graduates under the age of 24 were not employed after graduation. Recent college graduates are those that have graduated in the last five years. The labor market in the United States has not returned to normal after the recession. The post-collegiate jobs have been negatively affected by the crisis. According to the Economic Policy Research Institute, about 16.8 percent of the post-high school graduates between the years 2012 and 2013 are underemployed. Underemployment means that people are employed in the jobs below their qualifications. Underemployed people continue hunting for jobs and work for lower wages than other professionals in their fields. About 20 percent of the young graduates work part-time during the first year of graduation due to the lack of full-time jobs in their profession. The numbers are high given that most of the graduates have higher education debts. There has been a notion that degrees should be a guarantee for well-paying jobs. However, recent graduates report that current wage levels are far below their expectations.

The Federal Reserve Bank of New York has reported that the past two decades have been a challenge for fresh college graduates even before the economic recession. Before the recession, it took new graduation cohort at least a year to adjust to the new working conditions in the job market. However, the recession left the market in shambles threatening job security and full employment. In the last five years, college graduates have a tougher time securing a job. The situation has left them struggling in the jobs, which they are overqualified for, and receiving low wages. Economic experts have given several reasons why the job market in the last decade has been poor. The main reason is the two recessions that the country has faced. The recession of 2008 left the job market struggling with a stretch of the country’s economic resources. The first after the year 2000 was also faced with jobless recoveries. A large percentage of the population was adjusting to the new technologies in the working place that revolutionized the market. Corporations no longer rally in colleges before the graduating seasons in order  to look for fresh graduates.

General unemployment levels in the US have declined in the past year from 5 percent to 7 percent. However, the job market for the recent college graduates is far much fragile than the levels before the recession. The market has been strong for the fields that require technical skills due to their growth in the American economy. Healthcare and education have also had low unemployment levels at 3% and 4%, respectively. However, the graduates in other fields have not been lucky in the job market. The unemployment levels have been on their highest for the fields in construction, architecture, liberal arts, and social sciences. Forty percent of college students have graduated in the above mentioned disciplines. The fields record between 7 and 8 percent of unemployment levels for graduates after graduation. The 2001 economic recession reported the highest unemployment levels for recent college graduates. The levels improved after the economy recovered only to deteriorate in 2008 after the economic crisis. There has not been a significant drop after the recession, showing that the labor market has not stabilized, despite the demand for innovative and young labor that can easily adapt to the unexpected circumstances in the economy and technology.

Problems that post-collegiate professionals face after graduation are compounded due to the issues, such as higher education loans. College graduates leave school with high hopes that jobs will make them self-sufficient and independent of their guardians’ support. However, unemployment presents more problems to the unprepared youngsters, as compared to older unemployed people. Research shows that up to 70 percent of college graduates in the last three years have graduated with debts from the student loans. The average college borrower has a debt between 26,000 and 29,000 US dollars. The job market has also reported the highest underemployment rates in the past three decades. The underemployment rate was at 34 percent in 2002. The rate in 2013 has gone up to 44 percent. It shows that close to half of the college graduates in the country are looking for jobs while working for lower wages at higher qualifications. Adding that to the number of college graduates that are unemployed, statistics show that less than half of the recent college graduates end up working for the jobs requiring their qualifications. Job scarcity has also forced the recent graduates to work for jobs that do not utilize their professionalism, such as clerks in the retail stores or bartenders. It nullifies the reason, as to why they went to college and struggled with the payments and student loans. 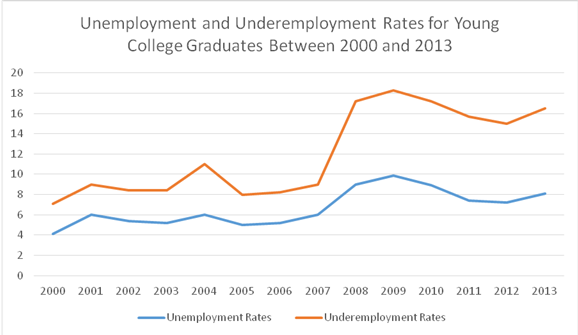 From the graph it can be seen that the unemployment and underemployment rates recovered steadily after the economic recession of 2001. However, the levels went extremely high in the United States after the global economics crisis of 2001. The underemployment levels spiked during the recession due to the uncertainties in the labor market. College graduates feared that the economy may dive into a continued recession and collapse the banking system, leaving people without formal employment. Consequently, young college graduates entered into any job opportunities that were available including odd part-time jobs. The recession also saw the laying off of many workers despite their experience due to the decline in resources. Therefore, young college graduates feared for their future. They took up jobs despite the low levels of qualifications required and the low wages the jobs offered. Both unemployment and underemployment levels have been decreasing gradually after the recession due to the economic recovery. However, the levels have risen slightly in the past two years, especially due to the increased number of graduates for the past two graduation seasons. Experts predict that the levels will decrease in the next five years and go back back to normal, as seen in the 1990s in a period of 10-15 years.

The last five classes that have graduated from college have had difficulties adjusting to the conditions in the job markets. The idleness exhibited by the unemployed graduates in the country can disrupt social peace, according to the Brookings Institution. 8 percent of recent college graduates between the ages of 21-25 are not employed or enrolled for higher education. Most of them are actively seeking for the employment opportunities. Others may be volunteering, taking care of families, unable to work due to certain disabilities, or just idling at home. Job scarcity denies college graduates the opportunity to pay their higher education loans, as well as well as to participate actively in the country’s economic growth. The graduates that are lucky to secure jobs immediately after graduation receive lower wages than they expected. The trend has been that college graduates each year receive lower wages than the previous graduates. The wages are also lower as compared to the previous generation. In the past decade, wage levels for the recent graduates have reduced each year after the inflation adjustments. In the year 2013, fresh workers with a high school diploma earned an average hourly wage of 9.84 US dollars. After the inflation adjustments, the wage levels are 11 percent lower than the levels in 2001. College graduates also face similar problems with the wage levels being 9 percent lower than the levels a decade ago. If the wage levels increased with the economic growth, young college graduates would receive up to 3000 US dollars more per year than their counterparts a decade ago. The decline in the wage levels points have decreased despite the economic recovery in the last five years.

The job market has reported a decline in the general job benefits in the past decade. Approximately 30 percent of the recent college graduates receive health benefits in the first year of employment, as compared to 54 percent ten years ago. Other benefits, such as house and commuter allowances, have also reduced significantly. Labor experts report that full recovery from the setbacks will take at least a decade. The graduates can also overcome the challenges as they gain more experience in their career. The process of economic recovery also presents more benefits for the labor market in the country, especially for the recent college graduates that are adapted for the changes in the labor market. The reality remains that students graduating from college will meet an unstable market. The conditions have been predicted to prevail in the next decade. Comparative employment shows that job satisfaction is not determined by a college graduate. The labor market has not been fair to the job seekers regardless of their education background, according to the economic experts. Improvements in employment for college graduates can significantly increase the levels of college education. The market discouraged young people from acquiring the college education. The problems of a fresh college graduate compound after graduating and missing a job opportunity because of the loans and expectations from their supporters. Failure to make improvement in the labor market leaves most of the fresh college graduates overqualified for the available jobs.